Every time I look down from a great height, I imagine myself falling down from it. Not because of suicidal ideation (far from it – I’d never hurt a Timmy: they’re endangered and must be cuddled and protected, you know!), but because of my gloriously attractive talent for clumsiness…

I’d take a step closer to the edge, a half-untied shoelace getting slightly stuck on a branch, causing me to lose my balance and take a bigger step than originally planned. A lost seagull circling overhead would see this unusual movement and freak out, causing it to void its bowels, the release ending up in my eye, causing me to let out a curse. This curse would then be recognized by my self-driving car (because I’m modern that way) and it would try to come to my assistance. The car, confused by my blinded, chaotic steps, would drive right past me, run over two Chinese tourists and drive over the cliff. The selfiesticks the tourists dropped, bounce on the ground and one of them bounces up rather high, effectively kicking me in my crotch, the contact of which would release the spring that usually holds the phone in place, but now grabs on to my testicles. Still blinded by bird poop, I try to grab hold of the selfiestick, and as I manage to release myself, holding up the selfiestick heroically, a lightning bolt strikes the metal forcefully. Confused to no extent, I try to run away, but sadly for me, my sense of direction is off and I run straight off the cliff, holding the selfiestick. On my way down to kiss some rocks with my scattered brain, lightning continues to strike me.

And people would still think it’s a suicide, but falling down, I would get annoyed by the bitter realisation that at that point, for once in my life, I would not be able to have the last word and correct everyone by just telling them, “It’s alright, I just stumbled and fell!”

Shower deaths are more unequivocally self-explanatory on the other hand:

“You see, inspector, this is obviously exactly what happened: the victim, T., was getting ready to take his annual shower. As you probably are well aware, water is transparent, so it may be possible that T. did not notice the layer of water already resting on the shower floor. Slightly rushed, T. threw his towel over the cabin (clearly to avoid letting the heat out when he wants to unwet himself, and took a step into the shower cabin. There, things went wrong. Expecting more grip underneath his feet, which – truth be told – do cover a lot more surface area than regular feet, (clearly an attempt of Mother Nature to help keep T.’s balance. Alas, to no avail!) his step was put right onto the surface that was still wet from its previous use. As we can see from the finger traces on the edges of the shower cabin, T. tried to overcompensate his impending loss of balance. On his way down, T’s head struck the shower tap right here, and then again against the hard glass of the shower cabin. The glass, while supposedly safety glass, shattered and a large shard forcefully fell down towards T.’s throat, slicing right through it with what can only be described as unlucky penetration (not to be confused with “lucky penetration”). Because the shower cabin was attached to the wall, the frame on which it rested was yanked out of position, taking a bit of the plaster wall along with it, exposing some electric wires. The falling metal frame cut one of the electric wires and dragged it all the way down to the shower floor, right where T.’s concussed head lay and his throat blood was flowing. The electric wire rather unfortunately ended up burning through T.’s left eyeball, electrocuting him at the same time, and only exacerbated by the soft stream of running water pouring from the rain shower head that was switched on by T.’s head crashing into the tap.”

“Sounds plausible… And the smell?”

“Oh, that’s from when he voided his bowels during the electrocution.”

“Damn! What an unlucky guy!” 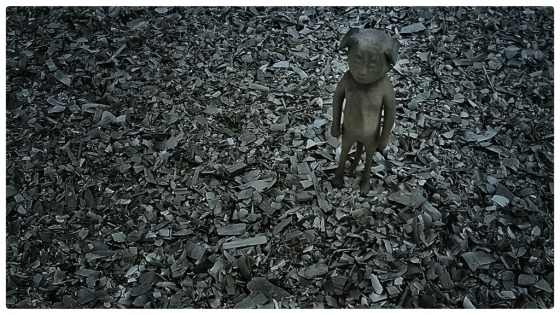